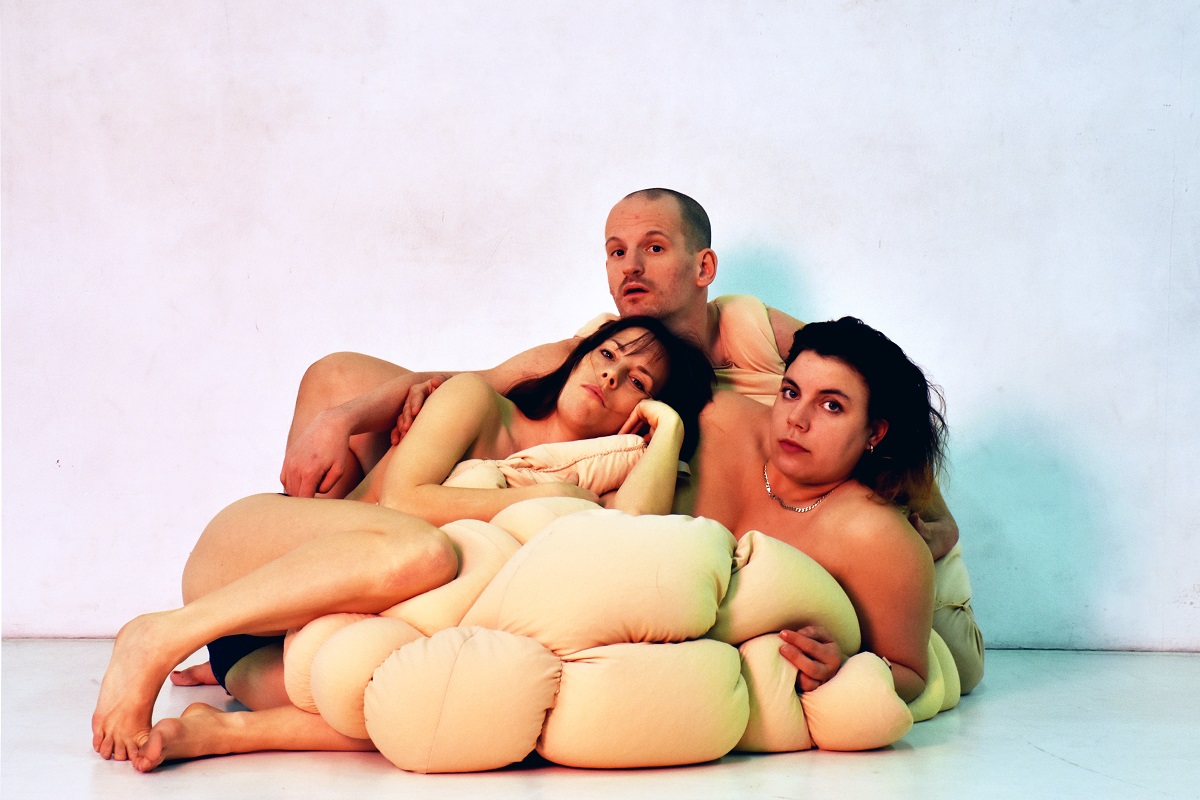 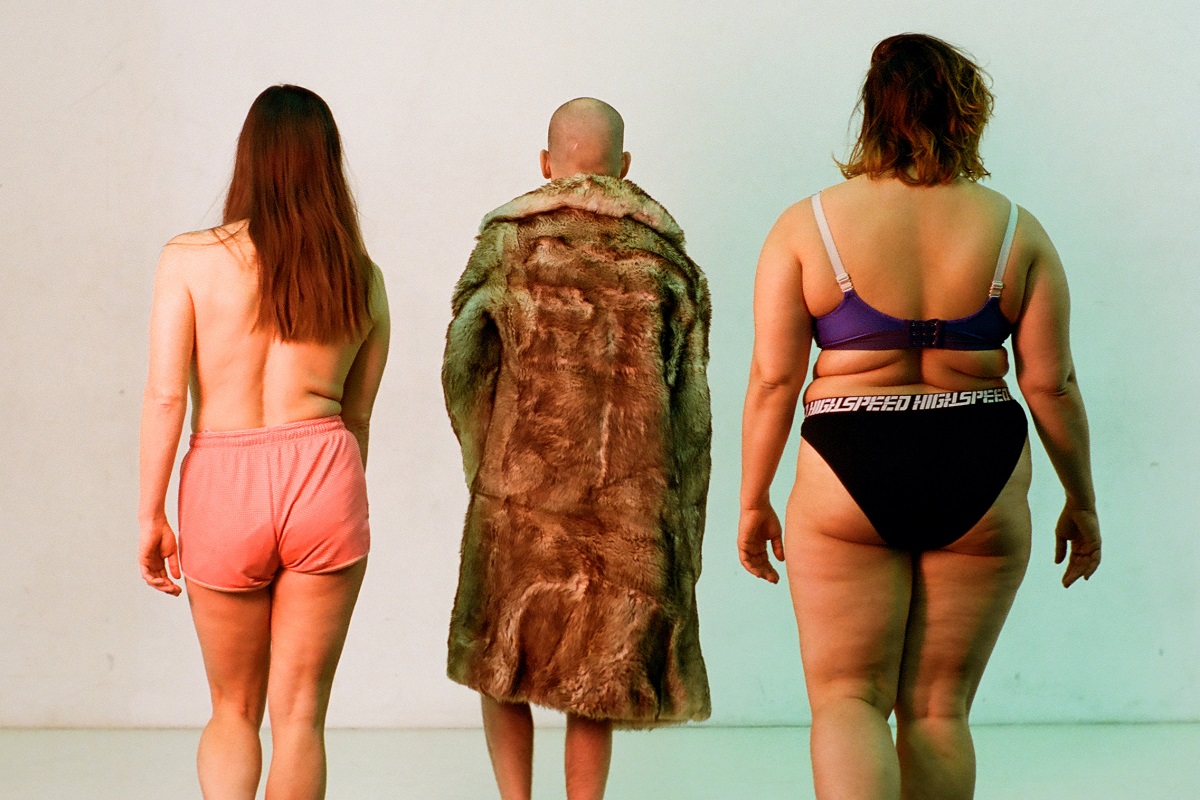 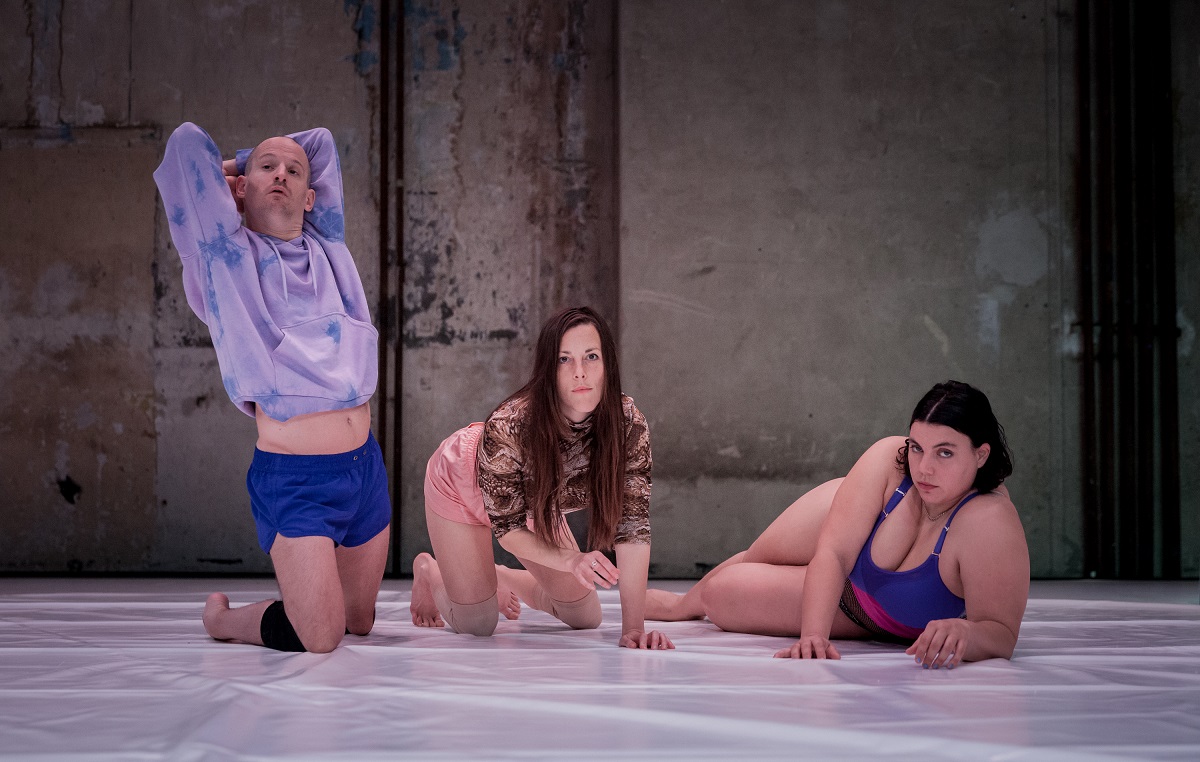 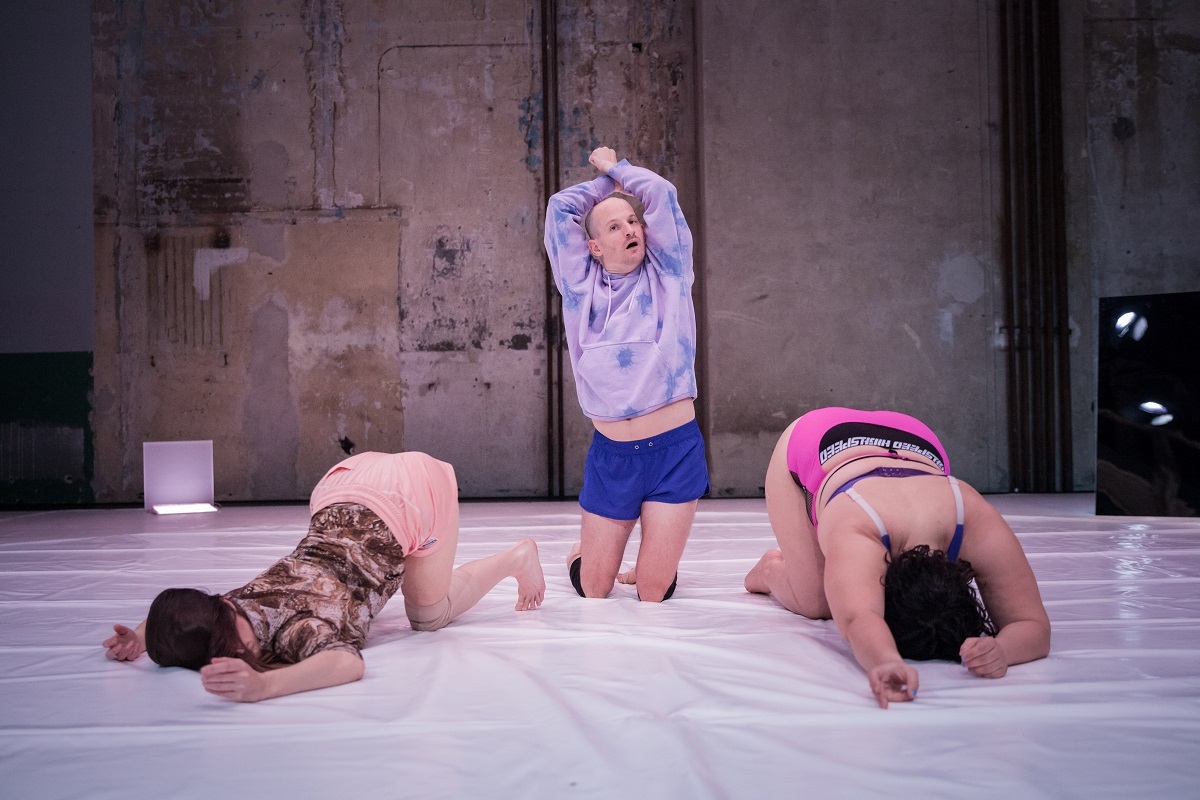 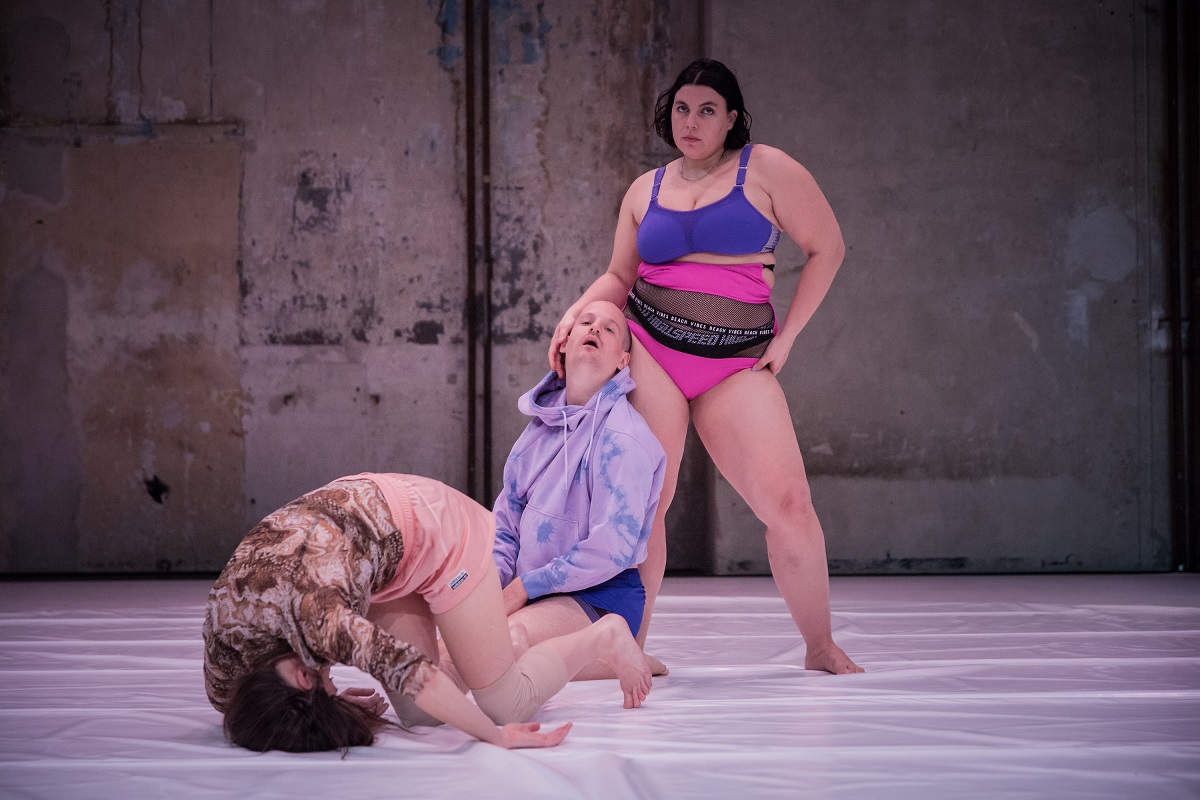 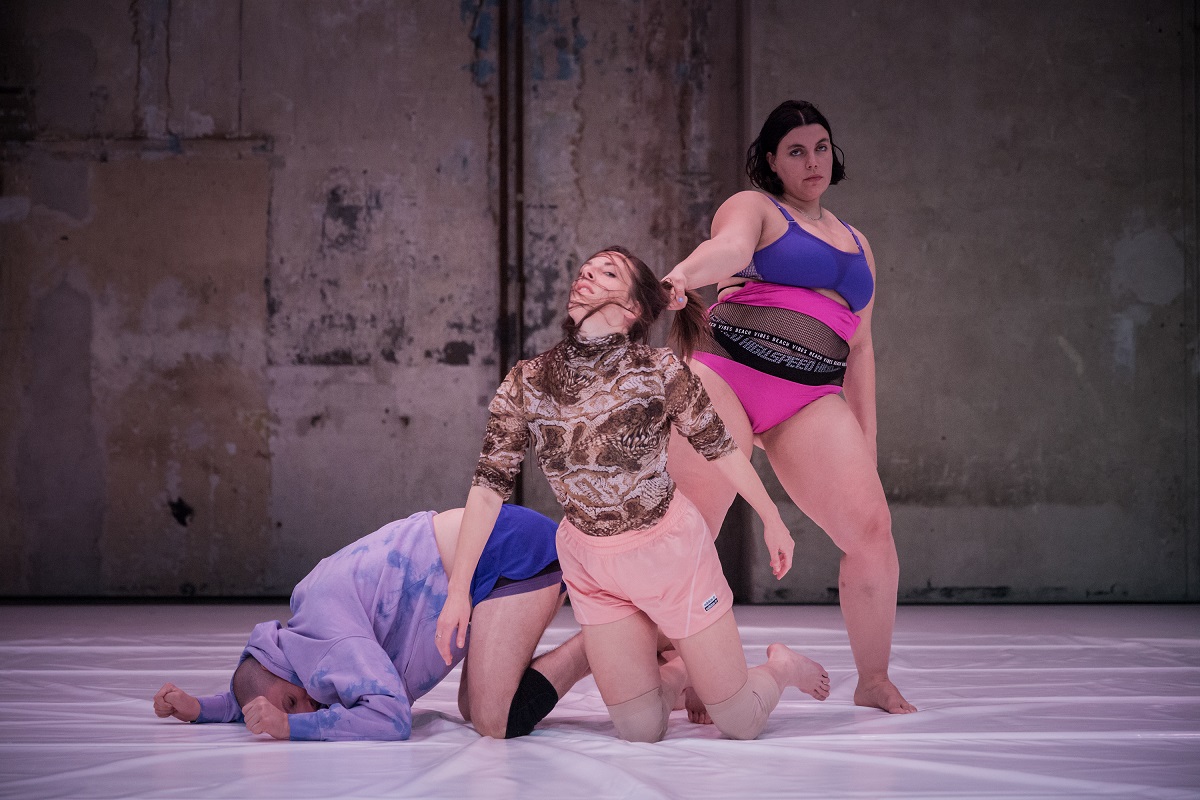 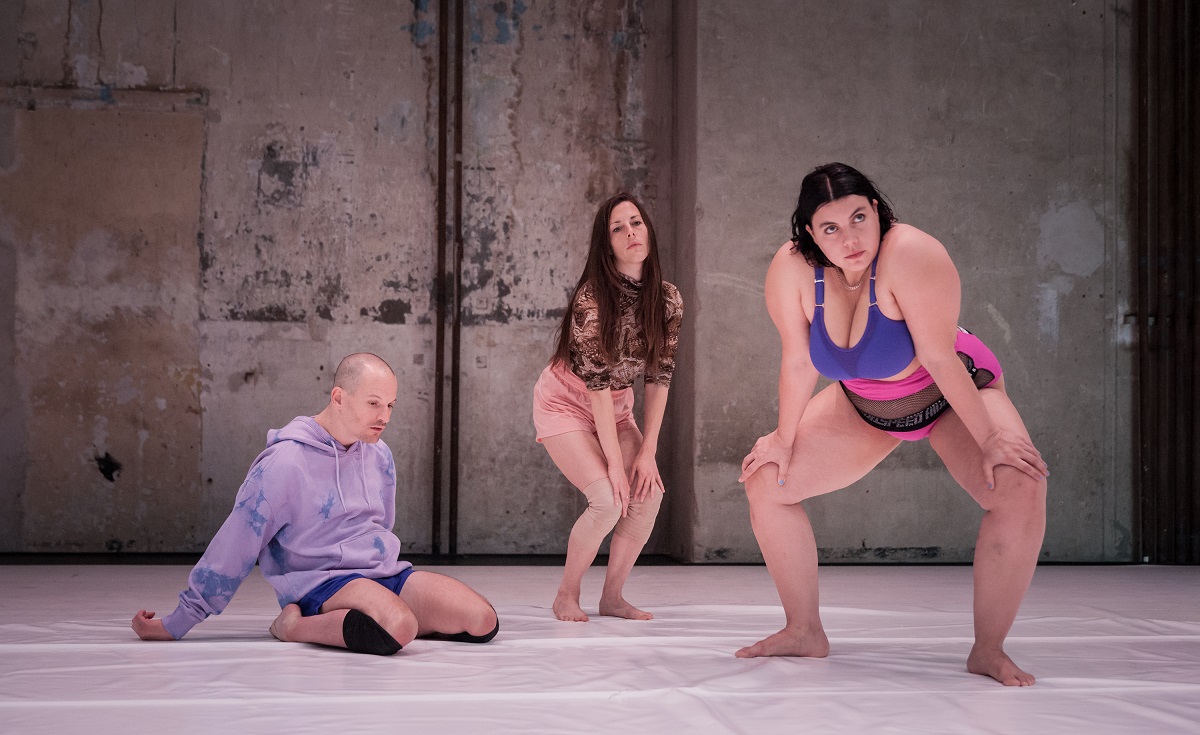 The central figure of We Bodies is the monster: it is neither animal nor human, neither man nor woman, neither natural nor artificial. It embodies multiplicity, is never entirely unambiguous and thus eludes the social practice of categorizing bodies. The three performers Vittucci, Sobottke and Turinsky also experience projections and phantasms on their bodies. For this reason, they create a series of exorcisms in which they distort pop-cultural figures and phenomena that have a particular influence on categories of “normal” or “beautiful”, into monstrousness. While the constructed idea of a natural order collapses, the possibility of reclaiming one’s own body opens up.

NOTICE Thanks to regular testing on SARS-CoV-2, the performance which dates from 2019 can be shown at the festival despite moments of physical closeness between the performers.

ACCESSIBILITY INFORMATION
The duration of the show is about 90 minutes. During the performance there are fast light changes and loud music. There is little to no talking in the piece. Silence in the audience is not mandatory. If you have any questions or require further information, please contact or 030 27 89 00 35.

TERESA VITTUCCI is a choreographer and performer. She graduated from the Conservatory in Vienna, the Ailey School, the Salzburg Experimental Academy of Dance (SEAD) and received her MA at the Hochschule der Künste Bern. She collaborates with Nils A. Lange, Marie Caroline Hominal, Simone Aughterlony, Trajal Harrell and others. Teresa has received numerous scholarships and a recognition award from the city of Zurich. Her works U betta cry, Lunchtime, All Eyes On and Hate me, Tender are toured nationally and internationally. At the SOPHIENSÆLE she was last seen with All Eyes On and Hate me, Tender at the SOPHIENSÆLE 2019 within the Queer Darlings 2019 focus. For Hate me, Tender she has been awarded the Swiss Dance Prize 2019. 2019-2020 Teresa Young is Associated Artist of the Tanzhaus Zürich. www.teresavittucci.com

MICHAEL TURINSKY lives and works as choreographer, performer and theorist in Vienna. His interest lies on the one hand in a thorough examination of the specific phenomenology of the body marked as “disabled”, its specific in-world-being, its relationship to temporality and rhythm, affect and affect production, gender and sexuality, visibility and opacity; and on the other hand in a rigorous examination of discourses around the productive tension between politics and aesthetics. As a performer he has collaborated with Bert Gstettner, Barbara Kraus, Legitimate Bodies/Robin Dingemans/Mick Bryson and Doris Uhlich, among others. His choreographic works include Heteronomous male, My body, your pleasure, Second Skin – Turn the beat around, Second Skin – Master of Ceremony, REVERBERATIONS. His collaboration with Doris Uhlich Ravemachine was awarded the Nestroy Special Prize in 2017. www.michaelturinsky.org

CLAIRE VIVIANNE SOBOTTKE understands her work as a place of resistance, which allows us to change norms of thinking and seeing. In 2017 she was awarded by the magazine Tanz as “Hoffnungsträgerin des Tanzes” and received the Fm4 Award of the Vienna ImPulsTanz Festival for her solo strange songs. In 2017 she initiated and curated Amazonas, an interdisciplinary platform for the support and networking of young female artists in Berlin, at the SOPHIENSÆLE. Claire Vivianne Sobottke teaches in various contexts, among others at the PACT Zollverein in Essen, HZT Berlin, the ImPulsTanz Festival in Vienna and at the University of the Arts Helsinki. At the SOPHIENSÆLE she recently performed Golden Game (2014) together with Tian Rotteveel, in the woods (2016) as part of the Witch Dance Project and together with Sheena McGrandles Bounty (2017).

TIAN ROTTEVEEL is a composer, choreographer and performer. He studied music composition at the Koninklijk Conservatorium Den Haag (NL), dance at SEAD (AU) and choreography at HZT Berlin. Particularly interested in hybrids of dance and music, he combines movement and sound as equal art forms. As a composer he has created commissioned works for e.g. the MAE Ensemble, Rosa Ensemble and the RIO Ensemble. With his solo Soulsqueezing (2012) he attracted attention in the dance scene for the first time. He has worked with Jeanine Durning, David Zambrano, Jeremy Wade, Tino Sehgal, Martin Nachbar and Hermann Heisig, among others, and teaches with dance companies such as Meg Stuart/ Damaged Goods, at dance schools and at festivals. At the SOPHIENSÆLEN he recently showed his choreographies Soulqueezing (2012), Golden Game (2015) and Heartcore (2016).

A co-production of OH DEAR and the Association for Philosophical Practice, with the Tanzhaus Zürich, the Kaserne Basel and the Arsenic Lausanne. In cooperation with the Wildwuchs Festival and the WUK Performing Arts, Vienna. Supported by Pro Helvetia, Stadt Zürich Kultur, Department of Culture Canton Zurich, City of Vienna and Migros Culture Percentage. With many thanks to ImpulsTanz Festival, Flausen and Young artists in residency / theaterlabor Bielefeld. The guest performance is funded by the Capital Cutural Fund. Media partner: taz. die tageszeitung. 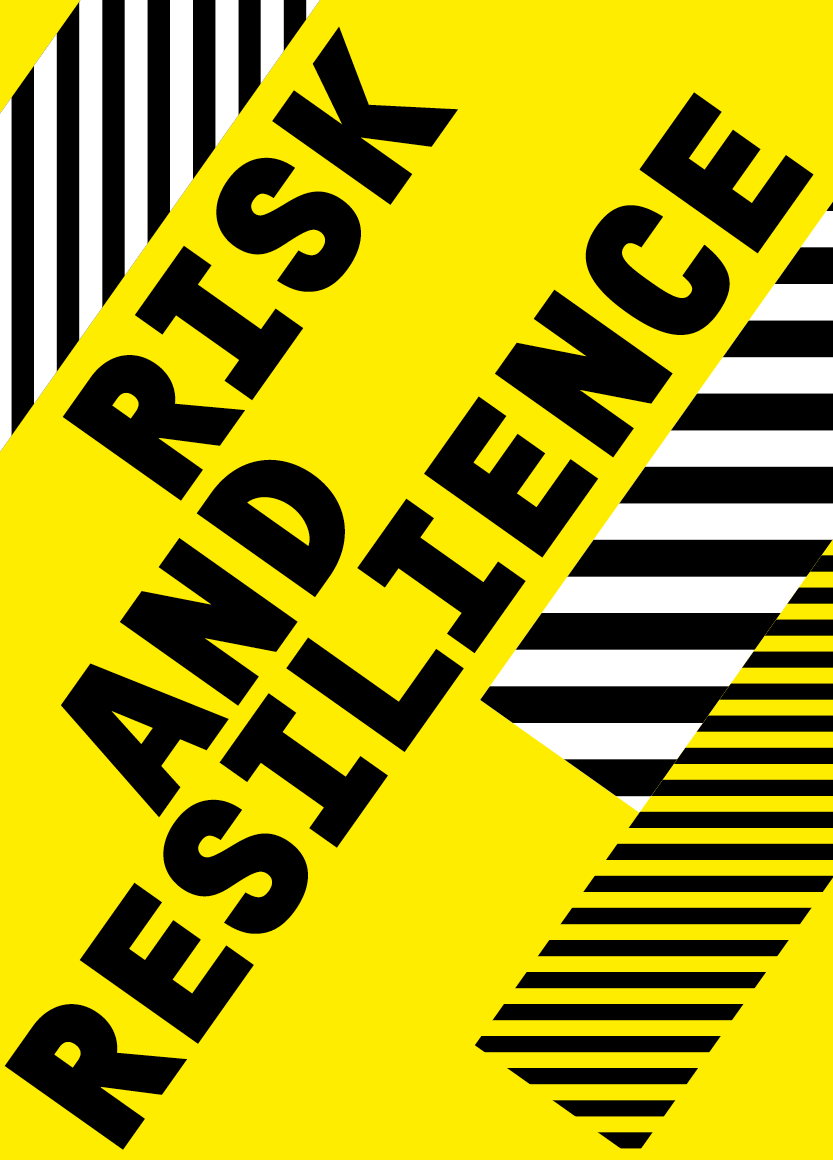